Before the match:
On a Friday night and in the middle of 5 of 6 away games, numbers were still very good for Melbourne. One of the biggest away days of the year for Melbourne – just behind Sydney. We brought across about 300 fans, 250 scarfers/official gear wearing wankers and about 50 lads. Plenty of Melbourne drove over to Adelaide and were making a presence in the city of churches from Thursday evening onwards. Majority drank at the same pub pre match, was relatively tame until about half an hour before kickoff. A good sing song and a few flares. The “mob” left and marched to the ground under heavy police attention whilst the lads left later to avoid detection from the jacks.

Adelaide open the scoring, flares from their end. Apparently the person who ripped the flare was caught in the home end. Adelaide’s scene to be honest is pretty rubbish – mainly scarfers. They have a couple of lads who know the score but both incidentally were drinking at a Melbourne pub pre game and were standing close to the away end during the match. Lots of provocation from Adelaide and Melbourne fans wanting to get at each other during the game.

Early in the second half, Melbourne score a penalty. Impressive blue smokie ripped in away end. Looked good in a sea of Eureka flags. Adelaide come back to score a goal and lead 2-1. Adelaide fans throw coins, bottles etc at Melbourne fans who went up and confronted them only to be forced away be security. Things were getting heated. Melbourne get another penalty and equalize in about the 80th minute. Away end goes mental and beer thrown absolutely everywhere, a real roar. One Melbourne lad runs on the pitch post penalty but gets back over. Security spot him and went to drag him out but he was protected by other lads in the Melbourne end. A couple of minutes later, Melbourne have a good chance but miss. Ball spills to another Melbourne player who also misses as the away end is silenced. Cue Billy Celeski toepoking in from six yards and the away end went absolutely mental. 5-6 lads jump the fence and run on the pitch, celebrating with players. All get back over bar one – the !
one who ran on after the second goal. Players jumping hoardings and celebrating with fans. Too many shots of the away end from the TV showing scarfers, missed the lads. Looked tacky with all the official gear unfortunately – didn’t do it justice, there was a real atmosphere about. All Melbourne fans (including South End wankers and scarfers) singing the same song for the last five minutes.

Plenty of Adelaide gesturing for Melbourne boys to come and have a crack. Melbourne lads arranged to go at them on the bridge but were held back by police. Lots of scuffles on the main street going from the ground, most lads involved in minor skirmishes. Jacks did their job – nothing kicked off bigstyle. A few opportunities for Adelaide to have a real crack but they did nothing. Melbourne’s lads have a strong reputation after charging Sydney in their own bay with very small numbers and not only standing their ground but dishing out a lot of punishment aswell. Around 30-40 Adelaide were waiting in the bushes for Melbourne but was only standoffs, massive police presence. Melbourne marched a good 5km into town.

All in all, a great derby and to pinch it 3-2 in the dying moments was special. Pity that not a huge deal of lads traveled but they still ran the show as normal. The mod about to leave on march Melbourne at the match Thanks to "Lucas" for this match report! 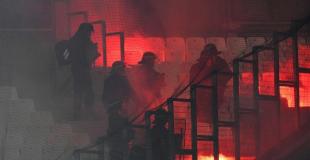 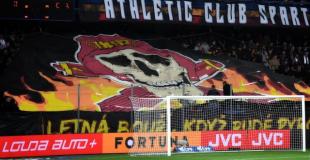 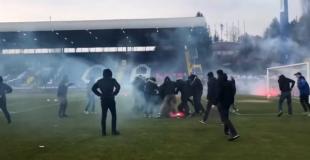